“I have had the grace and joy to have identified my faith in art and my art in faith“. 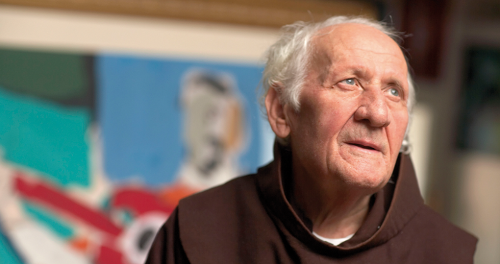 Fr. Costantino Ruggeri was born in Adro (Brescia) in 1925. He accomplished his classical studies at the Franciscan convents of Saiano and Sabbioncello and his theological studies at the convent of Busto Arsizio where he painted his cycle of frescoes. He devoted his youth to painting under Mario Sironi’s guidance and appreciation, who recognized his talent and admired his commitment.
After completing his theological studies, in 1951 he was ordained a priest by Cardinal Schuster in the Cathedral of Milan, and in the same year he exhibited his paintings for the first time at the “San Fedele” Gallery in Milan, presented by Mario Sironi.
He carried out his priesthood at Saint Anthony convent in Milan and devoted himself to painting. In 1954 he received his first “San Fedele” Prize and the third Marzotto Prize.
He became interested in sculpture at the end of the 1950s.
From 1958 to 1962 he attended Brera Academy and at the end of his studies he received the diploma in sculpture with a thesis on the Christian Catacombs epigraphic symbols, supervised by Luciano Minguzzi.
He interacted with such artists as: Fontana, Dova, Capogrossi, Crippa, Le Corbousier, and Alvar Aalto.
In 1959 he left Milan and took up his studio at Canepanova Convent in Pavia where he carried on his activity as a painter and sculptor, creating earthenware and pottery. Afterwards, he devoted himself to the study of the sacred space, planning chapels and looking for new forms of furnishings and liturgical vestments.
In the 1960s, he started making his stained-glass windows using Murano crystals that he set in concrete panels, and from 1966 he began creating a series of artistic, ancient blown glass-stained windows tied with lead.
He worked with some Italian architects such as Figini, Pollini, Giò Ponti, Gardella, Vaccaro, Gresleri, Trebbi and Nervi to build new churches. Keenly interested in this theme, he, along with the architect Luigi Leoni, tackled the creation of his own projects for sacred architecture: churches, parish buildings, sanctuaries, chapels and praying cenacles for religious institutes.

His first church “Saint Mary of Joy” in Varese was built in 1977 and afterwards the “Church of the Tabernacle” and “Saint Mary of Providence’s” in Geneva, “Saint Paul’s ” in Rho, “The Holy Spirit’s” in Pavia, “Saint Bernard’s” in Rome, and three churches in Burundi were constructed.
In 1986, he was in charge of the work for the Weekday Chapel in the Milan Cathedral where he made all the elements of the new liturgical space in patinated bronze. In 1987, he was commissioned for the building of the new “Divine Love’s Sanctuary,” consecrated on July 4th 1999 by Pope John Paul II.
In 1993, after some study tours to Japan, he planned the new sanctuary of Saint Francis Saverio in the town of Yamaguchi, which was solemnly opened on April 29th 1998.
Since 1993, when he created the Frate Sole Foundation, he promoted the appreciation of sacred art through the institution of the four-year Frate Sole Prize.
From 1993 to 2004, the International Prize was awarded to Tadao Ando, Alvaro Siza and Richard Meier. At the end of 2006, the new chapel Theotokos, Mother of God in Bethlehem, was consecrated along with the just restored Milk Cave.
On June 24th 2007, his last sculptural work representing “Franciacorta’s Facets” was presented in Adro, his birthplace.
On the following day, June 25th 2007, Fr. Costantino died at the hospital of Merate, near the convent of Sabbianello, where he had spent the last weeks of his life.

This website uses cookies to improve your experience while you navigate through the website. Out of these, the cookies that are categorized as necessary are stored on your browser as they are essential for the working of basic functionalities of the website. We also use third-party cookies that help us analyze and understand how you use this website. These cookies will be stored in your browser only with your consent. You also have the option to opt-out of these cookies. But opting out of some of these cookies may affect your browsing experience.
Necessary Sempre abilitato

Any cookies that may not be particularly necessary for the website to function and is used specifically to collect user personal data via analytics, ads, other embedded contents are termed as non-necessary cookies. It is mandatory to procure user consent prior to running these cookies on your website.